Abu Dhabi, UAE : The Abu Dhabi World Jiu-Jitsu Festival came to an end today with the participation of 1,577 players from 39 countries as follows: 1,196 players in the white belt category, 215 in the grey belt, 64 in the yellow belt, 13 in the orange belt, 4 the green belt, 85 in the blue belt. The countries that took part included: 1,389 players from UAE, 23 from KSA, 22 from Jordan, 21 from Russia, 20 from Brazil, 13 from Egypt, 6 from Canada, 6 from Palestine, 6 from Yemen, and players from Kuwait, Lebanon, France, Oman, India and USA. Spanning two days, the festival welcomed players from 4 to 17 years who flocked from all over the world to revel in the excitement of the championship. The young players took on the role of hype-builders ahead of the main event which kicks off on the 19th of April in the form of the Abu Dhabi World Jiu-Jitsu Professional Championship.

The youth focused Festival aims to celebrate Jiu-Jitsu and encourage young players to participate in a new experience as they compete in the international Championship. On day two of the event the audience celebrated in the exciting atmosphere and amazing activities including the participation of the “Make A Wish” foundation, in addition to three Iftah ya Semsem shows, a K-9 show presented by Abu Dhabi Police and other activities from the sponsors.

Across the duration of the Championship five important initiatives will run with the goal of highlighting important issues in society and raising awareness in the community; they includes various interactive activities and workshops to satisfy the tastes of everyone from children to seniors. Tomorrow’s initiative will focus on “Health and Sports”.
Commenting on the conclusion of the first-ever Abu Dhabi World Jiu-Jitsu Festival, HE Mohammed Salem Al Dhaheri, Vice, Chairman of the UAE Jiu-Jitsu Federation, said:

“We have been overwhelmed by the incredible support for Jiu-Jitsu which manifested itself through the audience and the encouragement of the first Jiu-Jitsu Festival and turnout. With more than 2,863 players attending from 41 countries, it is certainly a testament to the position of Abu Dhabi as the world capital of Jiu-Jitsu and the work both within the UAE Jiu-Jitsu Federation and with our private and government entities that has resulted in such a successful event. We’re proud to be well underway with what is sure to be 10 thrilling days of action both on and off the mat.”

Also not to be missed is the inaugural Abu Dhabi World Jiu-Jitsu Legends which takes place on the final day of competition, Saturday 23rd April, and features six of the greatest Jiu-Jitsu players ever to grace the mat.

Fans can also expect to enjoy a range of activities, family events and interactive stands at the expanded IPIC Fan Zone, and with a raffle draw up for grabs there is also the chance for attendees to win a Jaguar XF – for one lucky member of the UAE Jiu-Jitsu Federation – a Jaguar XE – to be won through the ADTV programme – and a Land Rover Discovery – only for fans that register in the IPIC Fan Zone. 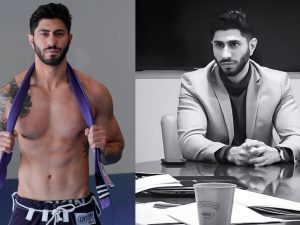 Jessin Ayari Knocking on The Door of the UFC!
RUMORS ! Former Champion Vs. Interim Champion Clash In Desert Force Beirut