Izzedine Al Derbani and Hamza Kooheji’s paths could cross again in a rematch that is six years in the making. The duo will fight in BRAVE CF 65 main and co-main events respectfully. The promotion is willing to pair them up again in one of the biggest matches in the Middle East MMA history.

The first meeting between Hamza Kooheji vs. Izzeddine Al Derbani

The two fighters first met back in 2016 at Desert Force 21. The Bahrain fighter was riding a three-fight winning streak. Meanwhile, his Jordan counterpart was looking for his fifth, consecutive win. This Desert Force interim featherweight title affair ended in just 24 seconds. The two fighters exchanged strikes with Al Derbani taking the upper hand. He forced Kooheji back to the fence. Next, when the Bahrain representative went for a takedown ‘The Palestine Samurai’ countered it with a knee strike. This flattened Kooheji on his back and gave Al Derbani an opening to dish out some punishment. The referee stopped the fight at the 0:24 mark.

After suffering his first loss Kooheji made his jump to BRAVE CF and fought on the promotion’s premiere event. He made his way back to the winning column and won three consecutive fights. This winning streak was put to an end by Khalid Taha at BRACE CF 12. However, history has repeated itself as this time Kooheji stacked up a five-fight winning streak. This time Brad Katona served him his third loss at BRAVE CF57.

Al Derbani also didn’t overstay his welcome in Desert Force. After beating Siyovush Gulmamadov at Desert Force 24 he switched his focus to Phoenix FC. There he competed both in Muay Thai and MMA matches. He bounced back between wins and losses making his way through Phoenix FC, UAE Warriors, and ACS. Now the time has come for the Jordani fighter to make his BRAVE CF debut.

Their matchups at BRAVE CF 65

Both fighters will be in action this Friday as Kooheji will square off against Eduardo Mora and Izzedine Al Derbani will take on UFC alumni, Jose Torres. Now the two could meet in a rematch that’s been six years in the making. The only question is – when it will happen? 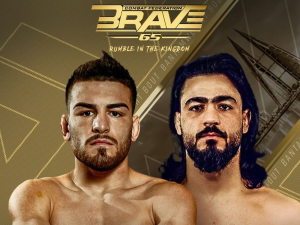