Mohammad “The Latest” Fakhreddine cements his undisputed legacy as the first-ever champion in two divisions at BRAVE Combat Federation. The combat sports icon from Lebanon improved his professional record to 15-4-0 after defeating his rival, Said Maalem from Algeria.

To make matters interesting, Maalem was cornered by Tahar Hadbi with whom Fakhreddine had one among the most fierce rivalries culminating in the all-out slugfest that thrilled fans in Jordan at BRAVE CF 10. During the first round, Fakhreddine absorbed serious damage putting fans on the edge of the seat expecting Maalem to win any moment. After rocking Fakhreddine, Maalem rained punches followed by heavy-duty knees from the clinch. In the final moments, the tides turned in favor of Fakhreddine as he caught the larger opponent in a choke.

The second round witnessed Fakhreddine charging with precision strikes that crumbled Maalem to the mat to score a TKO victory. The celebrations were interrupted by a heated exchange between Maalem’s corner and Fakhreddine. With Aaron Wallace picking up Fakhreddine and his teammate in a way that went viral all over the internet. 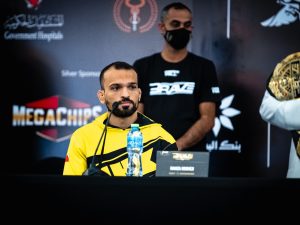 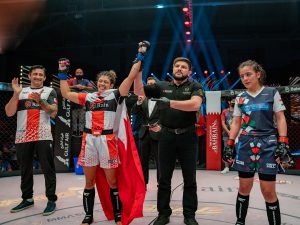