Bahrain’s great HH Sheikh Khalid Bin Hamad Al Khalifa will return to action after a seven months pause to make his professional boxing debut. The news has been confirmed on His Highness’s official Instagram account with videos showing the sheikh in his training routine.

“Official announcement: I will be fighting mid of December, this time it will be a pro boxing bout. Can’t wait to break some jaws.”

The 27 year old Bahraini Sheikh first appeared in the MMA cage in April 2016 when he impressively knocked out his opponent in less than 14 seconds. He then fought again in January 2017 putting on a show against India’s Manish Kumar.

In his return to the combat scene, Sheikh Khalid will attempt to test his fists inside a boxing ring. The event and opponent have not yet been announced, but it has been announced that the fight will be taking place mid-December. 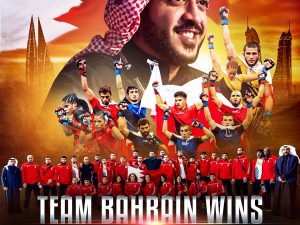