The title fight was stopped by the doctor in the second round. It was caused by a cut above Al Qaisi’s left eye. The infuriated Jordan fighter screamed at the official and even went after his opponent. For his own safety, Arnett had to jump out of the cage.

A few days later ‘Big Cat’ was interviewed by Break Your Face Youtube channel, where he spoke on the whole situation.

The Canadian fighter admitted that the fight could continue despite the unfortunate cut:

“It was a nasty cut. However, nobody wants to loose championship like this. They should have kept that fight going. However, his forehead was hanging out, a couple more punches, a couple more shots on the floor even… If I nicked that thing one more time it would have been bad news. It was bad news for him. He was leaking.”

Arnett went on by saying that the doctor and referee saved Al Qaisi’s life and he would’ve won the fight either way. According to him, it was just a matter of him hitting his opponent one or two more times.

The newly crowned champion revealed that the rematch will take place on September 17th. Arnett recalled that he offered it to Al Qalsi just after the fight ended. This didn’t save him from the outrage of his opponent:

“I went up to him and I said: Ali, I respect you. You deserve an immediate rematch. Tempers flared, he started pushing. I don’t want to get pushed after I’m just greeting him to an immediate rematch. So the pro wrestling in me, I kind of, I stuck my tongue out and threw my hand in the air. I was going to run to the top of the cage and celebrate. I did not realize that he was completely behind me. So right when I got to the top of the cage I was going to turn around celebrate, rub it in a little bit… And he had bumped the cage and I fell completely.”

The aforementioned rematch is scheduled on September 17th at UAE Warriors 33. 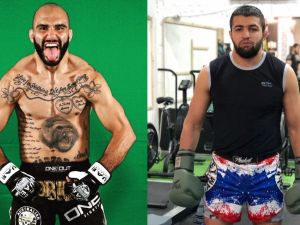