Every time you browsed the internet and read the headlines of combat sports, you hear the hype of a possible match pitting boxing lightweight champions Manny Pacquiao and Floyd Mayweather Jr., in a dispute of who is the best boxer in the world. After years of fueling these speculations, the fight will finally happen this May, but before that, there were a lot of trash talking, criticism and tension between both boxers, with Pacquiao accusing Mayweather of dodging him and giving lame excuses to avoid the Filipino champion.

Moving on to MMA, and into the women’s featherweight division to be specific, the same drama has been going on for almost 3 years between the current UFC champion Ronda Rousey and current Invicta and former Strikeforce champion Cristiane “Cyborg” Justino.

Recently, Rousey came up with a statement saying that she wants to be the Mayweather of MMA, meaning that she will remain undisputed and undefeated. But according to critics, this could also mean that she can be dodging Justino just like Mayweather has been doing with the Pacman before the scheduling of the fight.

Rousey accused Cyborg of being a cheat due to her use of Stanozol back in 2011, but since then, Cyborg claims that she did it for weight cut purposes and she is clean since then, she’s even willing to take the doping tests before the fight. But the question is, how much time will the fans need to wait before Rousey accepts fighting Cyborg?

For how long will the trash talk game continue before the clash of the female MMA titans? And who is really the best pound to pound female fighter? Only a decisive match like the long awaited Pacquiao vs Mayweather will decide that. We will now leave you with an exclusive short clip of Cyborg trashing Rousey in Arabic.

This translates into: Your turn will come Ronda, I will smash your head 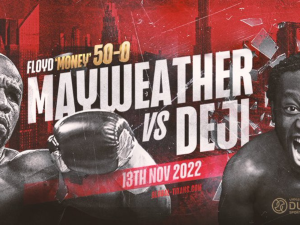 Floyd Mayweather to fight on November 13 in Dubai

Dana White Impressed By Ramadan Ondash, And You Will Be Too
Abi Nader: We Have To Keep Mark Tanios Busy