At ARES FC 8 Slim Trabelsi will face Azamat Nuftillaev. The winner will be crowned an ARES FC heavyweight champion.

Trabelsi has an unblemished 4 – 0 record. The Tunisian fighter is a Benelux MMA circuit veteran. He fought in a few regional promotions. He made his ARES FC debut back in June. At ARES FC 7 he was awarded a victory over Luis Henrique after three rounds of action.

Nutfillaev is a much more experienced fighter. He’s also unbeaten as he sports a 12 – 0 – 1 record. A central Asia MMA circuit veteran fought for a variety of promotions based in the region. ‘Dragon’ will be making both his European and ARES FC debut in a heavyweight title affair.

The Tunisian won two of his fights via TKO due to punches. He achieved this in the first and second rounds respectfully. He won the rest by a judges decision. It’s safe to say that he will be looking for an upset by taking the fight to the ground and utilizing his ground and pound.

Nutfillaev ended eight of his opponents with his strikes. He also has two submission wins to his name. The Kazakhstan fighter was rendered a victor on two different occasions. Interestingly enough, almost every his finish came inside the opening round. There was only one occurrence that he won in the second outing. It comes as no surprise that he’s a favorite to win this bout. His win in the first round is the most possible outcome of this matchup. 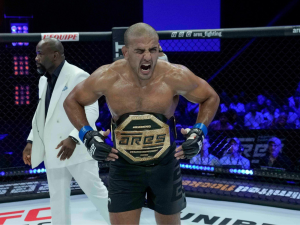 Slim Trabelsi to debut at UFC 280 against Parker Porter