The story between Tahar Hadbi and Mohammad Fakhreddine has gradually developed to become one of the biggest rivalries in Arab Mixed Martial Arts history.

Having recently fought in Bahrain at Brave Combat Federation 9: The Kingdom of Champions, a closely contested fight between these two welterweights ended in a 2nd round No Contest due to an illegal strike delivered by Hadbi which landed flush on Fakhreddine’s groin. As a result of having no closure, this dramatic ending to the fight only added more fuel to the fire of frustration and trash talk between the two.

The Hadbi/Fakhreddine rivalry has grown to include more individuals. Recently, Tarek Suleiman, one of the most notable fighters in the Arab world, who is also Mohammad Fakhreddine’s training partner and happened to be his in cage corner man for the fight, took a social media swing at Tahar Hadbi. Posting on Facebook, Suleiman commented on Hadbi’s poor sportsmanship and ethics, assuring that Fakhreddine will get the job done if he were to face-off against Hadbi again. Apparently, Suleiman is also fishing for a fight with Hadbi, claiming that the only reason they didn’t throw down post-fight was due to the referee stopping him from doing so.

“Sportsmanship at its worst. Tahar Hadbi proved that he has the worst ethics ever. My boy Mohammad Fakhreddine will teach him some (ethics) by smashing his face. Afterwards, I will put the worst beating on him and his fucking team. (They’re) Lucky enough that the ref was between us the last time. Next time, I will knock your teeth out boy.”

Quick to reply, Hadbi lashed back at Suleiman, questioning his accusations and claims, as well as advising him to drop the issue and focus on turning things around for himself in his own upcoming fight.

“You knock me out? You were in front of me in Bahrain and you didn’t do anything except talk about your past beef with Fakhreddine. Now you are at home and you talk shit. That’s your vision of sportsmanship? Concentrate on your prelims fight in Dubai and try to improve your record!”

As if the Hadbi vs Fakhreddine fight was not interesting enough! Now, the impact has doubled up with Suleiman throwing himself into the mix. Suleiman animosity to Hadbi was clear as soon as the fight ended, with the Syrian fighter flipping the middle finger to Hadbi.

The beef doesn’t look like it will be settling down anytime soon and it appears that the only way for Hadbi and Fakhreddine to “legally” settle their differences is to step up and do battle once again. News that will make a lot of local Arab fans ecstatic. 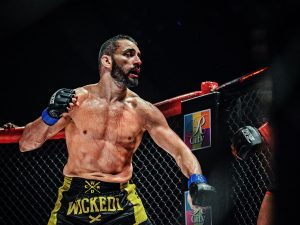 Return of Tahar Hadbi is a Must-Watch for MMA fans