Ahmed Faress nurtured his childhood dream to represent his nation in the biggest stage in combat sports. He started his journey by learning karate at the age of six. The sport that pushes human limits while emphasizing respect and discipline became a lifestyle for the bantamweight sensation from Egypt.

Faress has a professional record of 16-3-0 and he hopes to make it big after his win at ONE Warrior Series 10 against Alan Philpott. Alan “The Apprentice” Philpott had back-to-back wins in ONE’s developmental league. Faress overcame the odds and dominated his opponent with strikes before moving on to the grappling department to take advantage of the back mount. A tight rear-naked choke was locked in to secure one of the best victories in his career.

Faress has signed with MTK Global and believes that this is a crucial step towards his dream. The journey towards being a professional Mixed Martial Artist was filled with obstacles for the bantamweight fighter from Egypt. To reach this goal he had to overcome many obstacles in a nation where the sport is still growing.

In Egypt, we started training in 2010. But with not many experienced professionals to support us, often people were misleading the fighters and which affected the growth of the sport. But after some time, the knowledge about MMA started to expand and this contributed towards the progress of the sport in the nation. Many fighters are trying their best despite tough circumstances. We have hope and we are working hard to achieve our dream. I need to thank S & B Academy where I train and most importantly, I thank MTK Global for believing in me.

Faress has competed in multiple promotions and made a name for himself ahead of competing in the developmental for ONE Championship. Faress made news when he dominated the ex-UFC fighter from India, Bharat Khandare who was on a five-fight win streak. Faress secured a first-round submission victory at BRAVE CF 5 held in Mumbai, India.

The bantamweight fighter from Egypt appreciated the steps taken by ONE Championship to ensure the health and safety of the fighters. He expressed that he admires the way fighters are treated at ONE Championship and pointed out how they developed a system to ensure athletes will actually compete at the weight they walk around at, by hydration testing.

I really admire the way ONE Championship respects the fighter and give importance to our health, with many examinations, blood tests, and scans. Their team behaved very well with the fighters. Also, there is no system of challenging weight-cuts. There were hydration tests conducted 2 times to ensure this.

Faress was supported by his training partners who shared the same goal and dream. He trains alongside notable talent from the region who are also his teammates including Ahmed Amir, Hassan Abo Ali, Eslam Syaha, Marwan Mohamed, Omar Fayomy, Islam Nader Reda, Adham Muhammad, and team. He thanked the S&B academy which facilitates his training leading to the fights.

Faress is inspired by the legacy left behind by fighters including Muhammad Ali and Nassem Hamad. He acknowledged that the careers of top athletes Anderson Silva and Khabib Nurmagomedov had a profound impact on his career. He values the perspective taken by the promotion to value martial arts as a cultural treasure and encourages athletes to be ambassadors who promote humility, respect, and positivity.

Asia is the home of traditional martial arts and has deep rooted warrior culture. Also, martial arts and the fighter are respected which is the foundation on which the entire system works. I want to represent my nation and the culture that I am from, I want to be a world champion and a martial artist who will have a positive effect in the society.

ONE Championship Chairman and CEO, Chatri Sityodtong announced that ONE will be returning to Thailand for ONE: NO SURRENDER, scheduled for Friday, July 31st. NO SURRENDER will feature the same closed-door, audience-free format, said Sityodtong. Apart from the event itself, Sityodtong added that there will be 12 extra bouts to signal the launch of the new ONE Dark Series, a taped card for global broadcast partners.

Announcing ONE 159: De Ridder vs. Bigdash 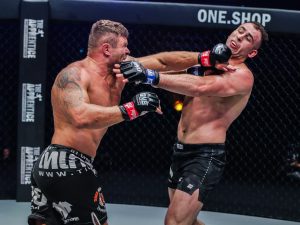