The main event of UAE Warriors 33 is a featherweight title rematch between the Canadian Jesse Arnett and a former champion, Ali AlQaisi. Their first meeting took place at UAE Warriors 30 in July In the second outing Arnett cut AlQaisi on the forehead forcing the cage side doctor to stop the fight.

Afterward, Arnett jumped up on the cage and AlQaisi chased after him, even taking him down off it. Arnett left the arena before he could get the belt in his hands.

A second title is on the line as Josh Togo of Lebanon fights Tahir Abdullaev. Togo had fought for the UAE Warriors promotion back in 2020. He’s an Australian MMA circuit veteran, who held the title in Eternal MMA and trains out of the Australian Top Team in Sydney.

Abduallaev is also a one-time UAE Warriors veteran.  He competed mainly on the Russian MMA circuit. He fought for a variety of promotions, including AMC Fight Nights and MMA-Series amongst others.

Ole-Jorgen Mandt Johnsen def. Nart Abida via TKO (Ground and Pound), 2:59 of Round 1

Otar Tanzilov def. Eduardo Dinis via TKO, 3:04 of Round 3

Coline Biron def. Ayson Erge via Submission (Armbar), 1:09 of Round 2 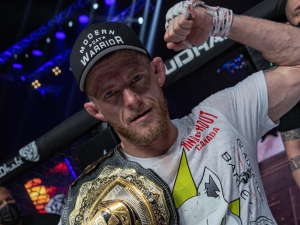