IMMAF board director Wissam Abi Nader reached out to Team Bahrain to congratulate them for their historic achievement at the 2016 IMMAF world championships which took place last week in Las Vegas, Nevada. Abi Nader, who headed Team Lebanon at IMMAF 2014 and IMMAF 2015, is now serving as member of the International Mixed Martial Arts Federation board representing asian countries.

Currently witnessing unprecedented growth of MMA as one of the country’s most popular sports, Bahrain had made its debut at the IMMAF World Championships in 2015, but was unsuccessful in its hunt for medals.

En route to the 2016 competitions, however, the country found much deserved success at the 2015 IMMAF European Open Championships. 27-year-old Hussein Ayyad (8-1) scored a first round submission win over 2015 Flyweight Silver medallist Serdar Atlas (Sweden) in what was a defining moment for the nation.

At this year’s IMMAF championships, Bahrain’s youngest prospect Fahad Abdulrazaq wrote national history by carrying the Bahraini flag all the way to the podium. Abdulrazaq bagged two dominant victories to earn the bronze medal in the men’s flyweight division.

Team Lebanon also won a gold medal in the super-heavyweight category of the World Championships, as fighter Charbel Diab destroyed the previously undefeated Marcin Kalata in the first round.

The Arab teams’ achievements at such elite and cosmopolitan championships is nothing but a manifestation of the thriving martial arts community in the region. 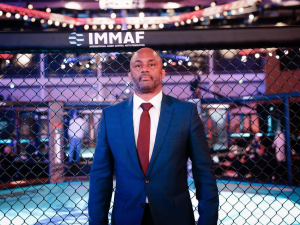