Desert Force is the dominant Middle East Professional MMA brand that brings you the best talent in the region competing against each other to become Champions. Desert Force is aired on MBC Action.

Desert Force MMA Championship was first launched back in 2010 in Amman, Jordan. In 2011, Desert Force launched the “Elimination Series”, a single-elimination tournament for Arab MMA fighters competing to become the first regional MMA title belt holders in 5 respective weight classes.
The Championship has hosted 4 rounds during the past year. Fighters from across the Middle East have competed in 5 weight classes, namely Featherweights, Lightweights, Welterweights, Middleweights and Light-Heavyweights; each class enforcing the United Rules of Mixed Martial Arts. Participating countries at the Second Round included: KSA, Qatar, Kuwait, Jordan, Iraq, Palestine, Syria, Lebanon, Egypt, Morocco and Tunisia. 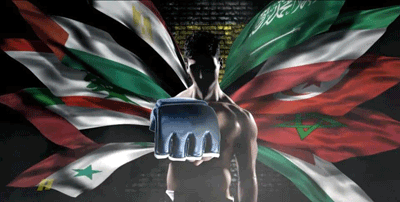